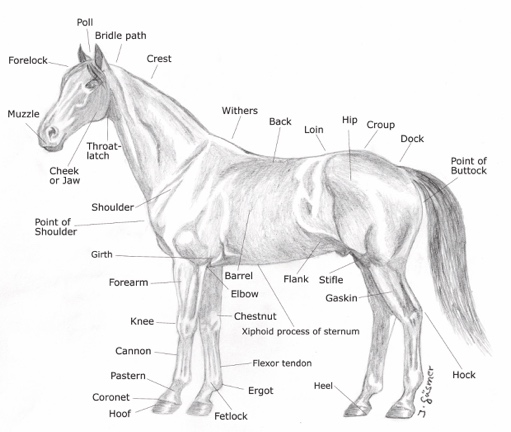 We need a good knowledge of the points of the horse so we know what anatomical region we are talking about. It is all about discussing some of the health issues of the horse.

Belly….this is located behind the last rib, the lower region before we get to the flank.

Back….the back is the area from the bottom end of the withers to where the last rib attaches itself.

Loins….this anatomical area of the horse is the lower back.

Croup / Hindquarter….is the area between the tuber sacral, or the point of the croup and the hindquarter, and the hind-quarters are the gluteal muscles and the gluteal fascia over the back-end.

Dock….this is the top part of the tail where the muscles of the tail surround the tailbone.

Point of the Buttock….the outermost point of the semi-tendonous hamstring. Directly inwards from this point, the end of bone you can feel is called the Ischial-Tuberosity.

Shoulder….the area from the scapular cartilage, below the withers to the point of the shoulder, predominantly the muscles over the scapular/shoulder-blade and around this area.

Elbow….the point of the elbow is behind the elbow joint where the bone is prominent.

Forearm….the forearm extends from the elbow to the knee of the horse.

Knee….made up of 8 carpal bones between the forearm and the canon bone.

Canon (Bone)….also called the shin, when it is the foreleg, lies between the knee and the fetlock.

Fetlock…. is the joint between the canon bone and the pastern.

Pastern….made up of the long pastern bone and the short pastern bone. It extends from the fetlock to the coronet band at the top of the hoof.

Coronet….the white band around the hoof from which the hoof wall grows.

The Hoof…The horses hoof refers to the hoof wall below the coronet band and sole of the foot.

Hip….you can feel where the point of the hip is by the hardness of the edge of the bone protruding outwards. The hip is also known as the tuber coxae.

The stifle….at the bottom of the thigh, it’s one of the hard-working joints associated with propulsion from the back-end.

Gaskin….this is the anatomical region between the stifle and the hock, the digital extensor muscles and digital flexor muscles. There are deeper muscles under these as well including the musculo-tendonous intersection of the gastronemius muscle and the calcaneal with tendon attachment at the point of the hock.

The hock….this is the joint between the gaskin and the cannon bone. Because the point of the hock ‘sticks out’ or what we say has a ‘protuberance’, it can be easily injured.

Revitalizing your horse mentally and physically 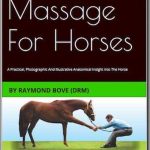 Warwick Farm, Sydney
Ray does great work with his massage. he beats the muscle injuries and freshens them up. He did great work with ‘Pasta… Read more “KJ Berry Foreman”

Buenos Aires,Argentina
​Instructor_Show-Jumping/Polo/Horesemanship
‘I first met Raymond here at the club in the winter of 1999, and I knew straight away that he… Read more “Edgar Ortelli”

Germany
The time with Raymond and his horses has been one of the most changing in my life. I have learned a lot about… Read more “Ina Guesmer”

Buenos Aires, Argentina
Raymond was here working at the club in winter 2001. I was so glad i met him. I loved watching him… Read more “Manuel la Marca”

Rio de Janiero, Brazil
Raymond worked here at the Hipica in Rio in 2001. I was very impressed with his style of work, and… Read more “Dr Mauro Reys”

My horse had a sore back. Ray fixed him up with his massage skills. I give ray the thumbs up and so does my horse. … Read more “Kylie Snelling”

Byron Bay NSW
Ray has done an amazing job with our horses for many years. Our successful older mare would not have won at… Read more “Heidi Edwards”

Hunter Valley NSW Australia
​I have been using Ray for over 4 years for the wellbeing, general maintenance and  treatment of injuries for my… Read more “Suzy Kalleske”